The Yulin festival in China has sparked outrage all over the internet, and this woman decided to change the lives of the dogs she could rescue.

Meet Yang Xiaoyun, a 65-year old retiree from Tianjin, China. She’s a former school teacher and now have devoted her time in taking care for her “children” as she calls them. So far, she already has more than 200 cats and around 1500 dogs in her care. 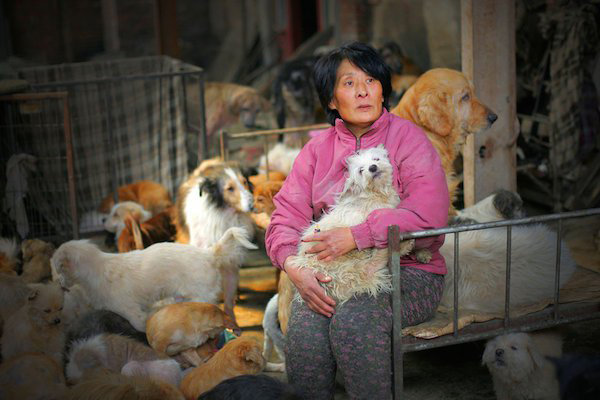 A lot of people have read her story and now consider her as a hero. Read more about her below and her new mission to save as many dogs as she can from this year’s Yulin dog meat festival:

Last year, she saved 360 dogs from the festival. This year, she says she has saved up 50,000 Yuan (approx. $8,000 dollars) for her mission. She must travel 1,652 miles from her home to Yulin, where she hopes to purchase as many dogs as she can and bring them home to her safe house.

She has sacrificed a lot and oftentimes puts her life in danger with her efforts to put a stop to the dog meat trade and to help the stray and abused animals she finds. Yang says she has found strays in streets, in restaurants that serve dog meat, and around agricultural colleges after the animals were used as experiments.

“These (dogs and cats) are all abandoned and abused. A lot are disabled: some have had their eyes scraped out; their mouths sewn shut; others have been scalded by boiling water or their legs have been broken. Now that I’ve come this far, no matter what happens I will never give up on them.”