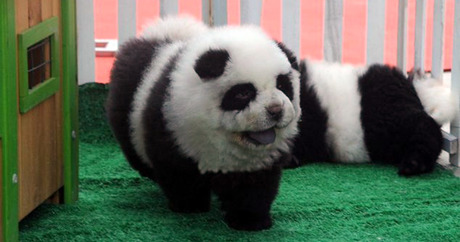 First, it was Tibetan Mastiffs that were all the rage in China. But now, there is a new kind of pet causing “panda-monium” in the Asian nation the Panda Dog.

With their distinctive black-and-white fluffy coats and black eye patches, it would be easy to mistake one of these popular pooches for an actual Panda, an endangered bear native to south central China.

But in all actuality, the Panda Dog is not a Panda at all they are usually Chow Chows, a fluffy breed of dog also native to China, who have been specially groomed, hair clipped and dyed so that they merely resemble Pandas.

Other fluffy dog breeds, like the smaller Bichon Frise, according to the New York Post, have also been turning up transformed into mini-Pandas — and they are selling like hotcakes.

Panda Dogs might technically be canine, but it’s their decidedly ursine appearance that is causing many middle class Chinese to line up in droves outside of stores offering the unusual pups for sale.

Pet shop owner Hsin Ch’en can barely keep up with the public’s demand for Panda Dogs at his store in China’s southwest Sichuan Province, where he and his staff spend their days grooming Chow pups to look like Pandas.

Perfecting the grooming technique here and now it is spreading across the country. With a bit of careful grooming and coloring it is easy to turn a Chow into a Panda Dog in about two hours.

Though one would imagine that the process of achieving the perfectly panda-like mane would be uncomfortable for the dogs, Ch’en wants the public to know it is not dangerous or burdensome for the dogs. There are no chemicals or cruelty involved.

The bear-like look lasts on average six weeks before Panda Dog owners must bring their bundles of fluff back to the groomer for a touch up. Ch’en says it is the amount of grooming that makes the Panda Dog a pricey pooch.

Ch’en is pleased to see that the role of dogs in China has changed so dramatically in recent years.

Ten years ago the natural instinct of a Chinese person was to eat a dog. Now like westerners, they want one as a companion. The cute breeds like French Bulldogs and Labradors were the favorites, but now it is the Panda Dog.