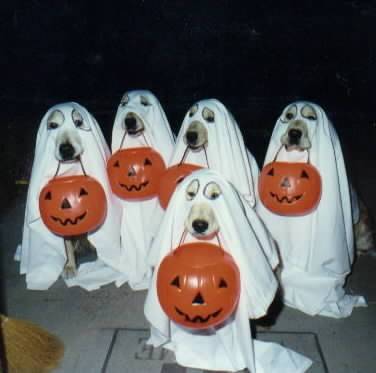 Mysterious creak on the staircase? Warm spot on your bed? Dog tags jangling when you’re all alone? Sensation of a phantom paw on your shoulder? Could be a ghost dog!

Maybe your beloved pet has passed away, or you’re standing upon an ancient dog run/burial ground. Maybe unbeknownst to you, your house was built on an old abandoned pet cemetery or you’re spending the night in an ancient castle turned bed and breakfast. Whatever the case may be, you’re experiencing paranormal pup activity and no surprise, these phantom pup sightings have been reported nationwide and around the world. People have witnessed ghost dogs going on ghost walks, felt the spirits of dogs long passed looking for scraps under the table and seen paranormal pooch energies resting peacefully in their old favorite spot by the fire.

So if you think you’ve seen the ghost or spirit of a dog, don’t feel crazy! You’re not alone.

Some say your pet dogs come back to visit you from beyond to make sure you’re okay, and to let you know they’re still watching over you. This can be a great comfort, especially if your pet has been taken from you suddenly, and you’re still grieving painfully.

Then usually, after your ghost pet visits you, they move on to their next life, and they’re not seen again.

Now, other ghost dogs, who might more accurately be called apparitions, show up at certain landmarks frequently throughout time, to familiars and strangers alike. It’s like they’ve become part of the landscape. That, or they can’t give up their favorite chair.

At the Holly Hotel, in Holly Michigan, an apparition of Leona the rat terrier runs up and down the halls and barks. Oh, those terriers! Even after life!

But be careful. Not all ghost dogs are man’s dead best friend. Like, in Valle Crucis, North Carolina, there’s a demon ghost dog, that springs out of the cemetery, will chase you down, and come right after your car!

And if you visit Hanging Hills, Connecticut– you only want to meet their legendary ghost, the Black Dog, once. Then get out of there! Because if you keep running into him, it’s a total death omen, ahh!

The lesson is: Don’t approach the ghosts of dogs you don’t know, or at least ask their ghost owners for permission first.