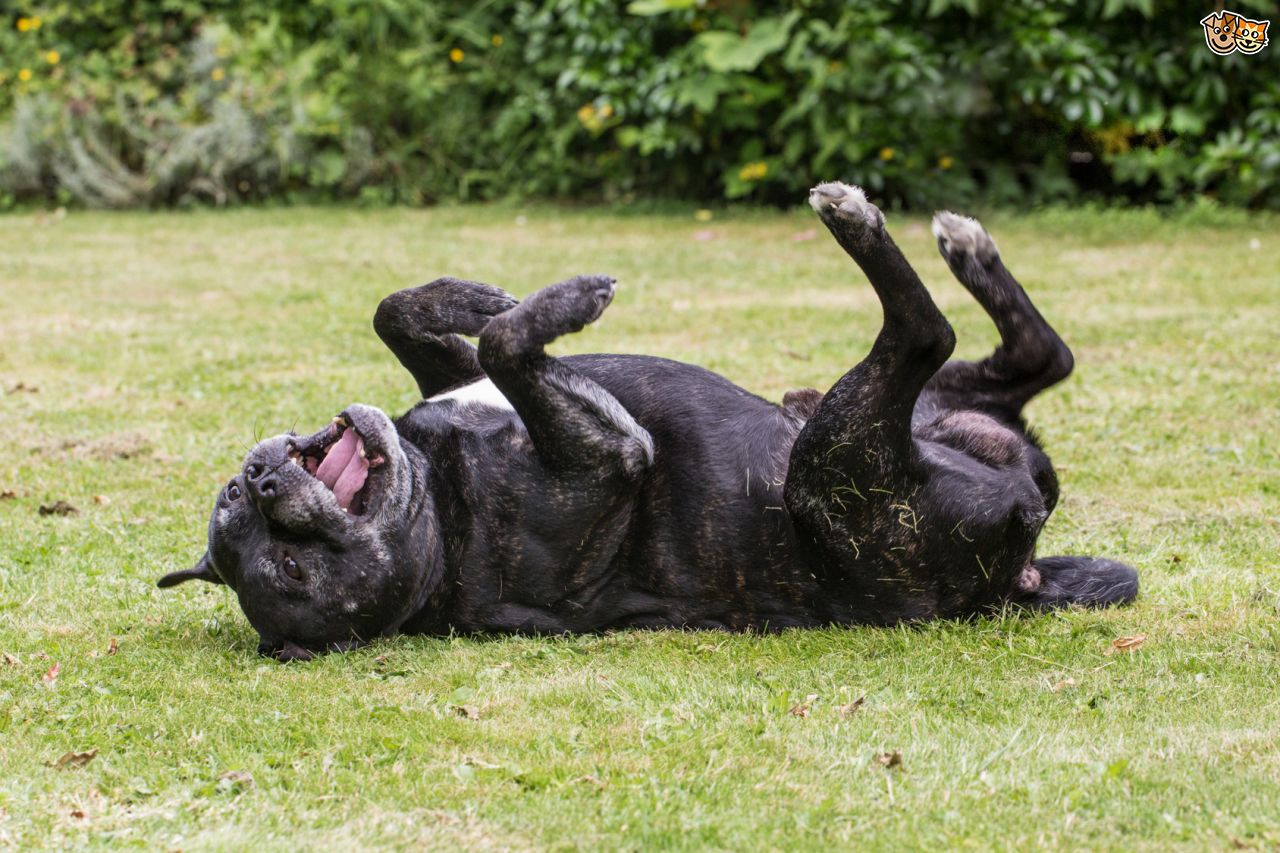 Though it may seem like an odd behavior, rolling in the grass is about as normal as it gets for dogs. Here are some of the most common reasons experts believe your dog gets down and dirty with the turf.

1. Inherited from Wolves
That’s right, the wolf — a distant cousin to our domestic dogs — do it too. “When a wolf encounters a novel odor, it first sniffs and then rolls in it, getting the scent on its body, especially around the face and neck,” says Pat Goodmann, research associate and curator of Wolf Park in Indiana. “Upon its return, the pack greets it and during the greeting investigates the scent thoroughly. At Wolf Park, we’ve observed several instances where one or more pack members has then followed the scent directly back to its origin.”

2. Getting Rid of Unwanted Smells
A dog has more than 220 million olfactory receptors in its nose versus a paltry 5 million receptors for humans, according to Dr. Julio Correa, associate professor of Food and Animal Sciences at Alabama A&M University. It’s no wonder, then, that dogs have a heightened sense of smell we cannot understand. So just because you think something smells wonderful (shampoos, perfumes, etc.) doesn’t mean your dog will agree. Every dog is different, though. Try out various bathing and/grooming products until you find a scent that you can both appreciate. If nothing works, you may have to settle on an odorless shampoo and no perfume.

3. Alleviating a Bad Itch
Your dog’s need for rolling in the grass may also be an indication of a health issue that is causing itching. This may include such issues as skin allergies or flea and tick bites. Have your dog examined by a veterinarian to identify the underlying cause and, if you haven’t already done so, begin your dog on a flea and tick preventive regimen.

4. Obsessive Behavior
A constant need to roll in the grass could be a sign of an obsessive compulsive disorder. The solution? According to the late Dr. Sofia Yin, veterinarian and animal behaviorist, it’s important to keep your eyes open for things that excite your dog’s nose and to call the dog back to your side before he is rolling in ecstasy. Then keep him engaged in fun games and rewards around you so that he forgets the potential stinky fun elsewhere. While the training time for a good recall makes this solution sound tedious, the time saved on needless baths makes the effort easily worthwhile.

So, is rolling in the grass dangerous? It’s not the grass that is dangerous; it’s all the hidden stuff that’s in the grass which poses a risk. Some lawns are treated are treated with fertilizers, pesticides and herbicides that may have active ingredients which are poisonous for dogs. Fleas and ticks, which can be disease carriers, are also often found year-round in grasses and wooded areas. Lastly, bacteria, viruses and parasites may be lurking in the grass or on the dirt. Be sure your dog is on a flea and tick preventive regimen and always stay up to date on his or her vaccines. If you sense something is wrong, don’t delay. Bring your dog to a veterinarian immediately.