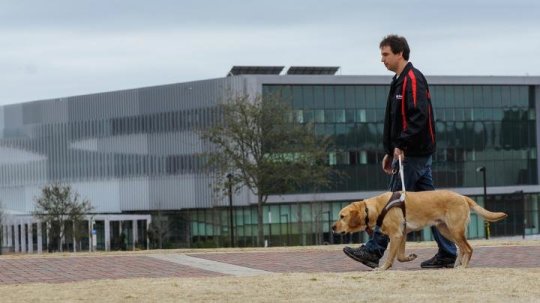 Researchers at North Carolina State University have developed a device that allows people who are blind to monitor their guide dogs, in order to keep tabs on the health and well-being of their canine companions.

Dogs primarily communicate through their movements and posture, which makes it difficult or impossible for people who are blind to fully understand their dogs’ needs on a moment-to-moment basis said David Roberts, an assistant professor of computer science at NC State and co-author of a paper describing the new technology. This challenge is particularly pronounced in guide dogs, who are bred and trained to be outwardly calm and avoid drawing attention to themselves in public.

To address this need, the researchers have developed a suite of technologies that monitor a dog’s breathing and heart rate and share the information with the dog’s handler.

The goal is to let guide dog handlers know when their dogs are stressed or anxious said Sean Mealin, a Ph.D. student at NC State and lead author of the paper. This is important because it is widely believed that stress is a significant contributing factor to early retirement of guide dogs and other service animals. The technology may also be able to help handlers detect other health problems, such as symptoms of heat exhaustion.

The research team had previously developed monitoring technologies that are incorporated into a lightweight harness that can be worn by rescue or service dogs. The trick was to find a way to share that monitoring data with users who are blind — and to do so in a way that allows those users to act on the information.

So, the researchers developed a specialized handle that attaches to a guide dog’s harness. The handle is equipped with two vibrating motors.

The second motor is embedded in the handle near the handler’s pinky finger, and vibrates in synch with the dog’s breathing. The vibration increases and decreases in intensity, to simulate the dog breathing in and out.

The prototype handle has been tested using simulated heart rate and respiratory data, and was found to be effective at accurately conveying information to users.

They’re refreshing the design and plan to do additional testing with guide-dog handlers with the ultimate goal to provide technology that can help both guide dogs and their people. That won’t be in the immediate future, but we’re optimistic that we’ll get there.