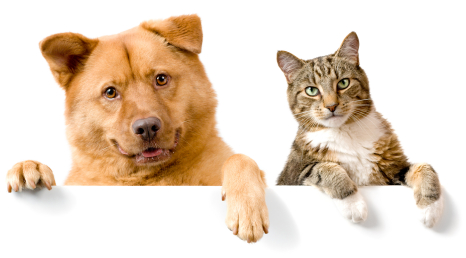 Despite the cliché about fighting like cats and dogs, it’s perfectly possible for the two species to live happily under one roof. However, it’s also perfectly possible for a cat to injure a dog, and for a dog to seriously hurt or even kill a cat. To keep your home a peaceable kingdom, you’ll want to arm yourself with some know-how before you add a new four-legged resident.

Your best shot at pet togetherness is to get your cat and dog when they’re both young. Kittens and puppies who grow up together are much more likely to get along, and they can even become close buddies.

That said, if you’ve got an adult pet, it’s possible to find a dog or cat who will coexist with him. But before you dive in to the search and fall in love with a dog or cat that will turn your home into a battle zone, here are some pointers to keep in mind:

If you’ve already got an adult cat, it’s better to get an adult dog than a puppy. That puppy exuberance that we find so charming is annoying and stressful to cats. Look for a grown-up dog with a track record of living peacefully with felines. Definitely avoid any dog with a high prey drive (the tendency to chase and sometimes kill smaller animals).

If you’ve already got a dog, look for a kitten or a laid-back adult cat who’s lived with canines before; they’re less likely to run from your dog. Fleeing cats will trigger most dogs to chase.

Keep in mind that some dogs just aren’t suited to living with cats. If your dog fixates on and stalks cats, squirrels, or smaller dogs, he’s got a high prey drive. It’s difficult if not impossible to train such a dog to ignore his instincts.

If you’ve already got several dogs, think twice about getting a cat. Dogs are more likely to chase, harass, or harm a cat if they’re in a pack.
If you’re adopting, tell the shelter or rescue group that you’ve got another animal at home. They should be happy to give your perspective pet a trial run with a shelter dog or cat to see how they react.

Something to keep in mind as you’re thinking about a new pet: many dogs love to chase cats but have no intention of harming them. Still, being chased and cornered by a dog is stressful for cats, so consider your kitty’s peace of mind as well as safety.

Before You Bring Your New Pet Home

You can ease the introduction if you do some advance preparation.

1. Make sure the cat can escape if she needs to. Cats are more likely to be hurt by dogs than vice versa, so make sure your cat has spots throughout the house — cleared-off countertops and shelves, kitty condos, and so on — to leap out of harm’s way.

You’ll also want to create areas where the cat can get a good distance away from the dog. You can block off rooms with baby gates, so long as your dog can’t jump over them, or install cat doors that will let your cat escape outside or into another room.

If you already have a cat and are preparing to bring a new dog home, get your kitty acquainted with these escape routes and hiding places in advance. Lure her through the cat door, over a gate, or onto a safety perch with the help of a food treat.

2. Set up the cat’s belongings where the dog can’t get to them. Move the cat’s food, water, toys, and litter box to an area the dog can’t reach. The idea is to allow the cat to do whatever she needs to do without having to go near the dog; that way, she can explore the new pooch and his territory at her own speed.

Do any rearranging of your kitty’s set-up a few weeks before you bring a new dog home, so she has time to get used to it. A new member of the household will be taxing enough for your cat, and having all her things moved at the same time will make it that much harder.

The key is to go as slowly as it takes to keep fear and aggression at a minimum. It’s likely that you’ll see some of both, but if you’re careful, you can stop it before it snowballs.

Keep going over each step until it’s old hat to both animals, and if either gets frightened or overly excited, just go back to the previous step and keep practicing until they’re calm again. This process may take days, or it may take months.

1. Get them used to each other’s scent. Rub a cloth on each pet and put it in the other’s hang-out spot — on the dog bed, under the cat’s food dish, on your lap. You may have to refresh the cloth with the animal’s scent several times. Keep it up until neither one seems overly excited or distressed by the other’s smell — barking and whining in your dog and a swishing tail in your cat are signs they need more time.

2. Let them investigate each other’s living areas. While the cat’s outside or elsewhere in the house, bring the dog in to sniff around her lair, and vice versa. This way they can explore the other’s territory and scent without a direct face-off.

3. Introduce them through a door or baby gate. Bring the dog and cat on opposite sides of a closed door or baby gate, with a person on both sides. Don’t restrain your cat at all; feeling like she can’t get away may frighten her.

Let them sniff under the door or through the gate, but if your cat doesn’t want to get too close, don’t force her. Lavish them both with praise, attention, and treats. You want them to think that good things happen when the other pet is around. Ask the dog to sit, lie down, and perform any other commands he knows, praising and rewarding him whenever he focuses on you and not the cat.

4. Introduce them with the dog on leash. Again, don’t restrain the cat — she may panic if she feels like she can’t escape this new, scary creature. Keep the dog on leash so you can stop him if he tries to give chase.

Again, ask the dog to obey some commands, rewarding him for focusing on you rather than on the cat.

Some cats will hiss and swipe at a curious or obnoxious dog to warn him, “Back off!” That’s actually a better response than running away, which often triggers the dog to take off after her.

If the cat flees and your dog starts to chase her, grab the leash, firmly tell your dog, “No” or “Leave it,” and ask him to sit. If he returns his attention to you, give him a food reward — a really tasty one — for his restraint.

Once your dog and cat seem fairly comfortable in each other’s company, you can let them roam around together when you’re home. But to keep the peace, it’s wise to separate them in different areas of the house when you go out until you’re very, very sure they’ll get along. Some experts recommend making this a permanent policy, to keep all the pets safe.